To get on the e-mail list please send your name to  philgoodstein@gmail.com

Author Phil Goodstein is a Denver native who has churned out more than 20 volumes about the Mile High City.  Not only has he seen to it that the volume is very well illustrated but, as is his wont, he emphasizes history from the bottom up.  He explores controversies over the use of the Civic Center while emphasizing the way the different hopes and perspectives of various classes and economic interests have shaped the community.  In a word, The Denver Civic Center is not just a history of the land in and around the Civic Center, but it is a profile of Denver as a whole.  It is must reading for anybody seeking to grasp the nature of the Mile High City. Information about Goodstein’s books can be found at capitolhillbooks.com

Talks and Tours by Phil Goodstein

The Colfax Tattered Cover, at Colfax and Elizabeth Street, across Colfax from East High, will host Phil Goodstein as he speaks about Schools for a New Century. (The store is two blocks east of Josephine Street.)

This is a free talk about the centennial of when the Ku Klux Klan elected one of its own, Ben Stapleton, mayor in 1923. The lecture will focus on city politics, including the legacy of the 1983 triumph of Federico Peña and how Michael Hancock became mayor in 2011. It is at Brother Jeff’s, 2836 Welton Street in the heart of historic Five Points.

Wednesday, February 1: Everything You Ever Wanted to Know about Denver, 6:30 pm–9:00 pm

This is the first of a series of four lectures on the history of Denver from the Pikes Peak gold rush to the present. The focus of week one will be on the forging of the area. Along the way, there will be a discussion of the nature of the city’s street system. It meets at 1330 Monroe Street. The cost is $15. All four lectures cost $50.

An informal, free discussion of Denver history at politics over dinner, is at Mici, 727 Colorado Boulevard (on the west side of the road in the shoppette near Seventh Avenue).

Part two of Everything, the topic will be railroads, tuberculosis, and 19th-century sex scandals. It meets at 1330 Monroe Street. The cost is $15.

This is another talk about Schools for a New Century. The free event will feature the Park Hill dimension of the school story. It is at the Park Hill Library at the northeast corner of Montview Boulevard and Dexter Street. (Dexter is seven blocks east of Colorado Boulevard.)

The Mile High City was in upheaval during the first third of the 20th century. Included was a thoroughly corrupt city machine, a powerful reform movement, militant labor protests, and the rise and rule of the Ku Klux Klan. The session is at 1330 Monroe Street. The cost is $15.

How did Denver grow from a cow town into a major metropolis? What is the story about DIA, culture, politics? How is it that Denver became a sports-crazy community even while it rejected hosting the 1976 Winter Olympics? These questions and the nature of contemporary Denver will be the focus of week four. It meets at 1330 Monroe Street. The cost is $15.

The tour season gets underway with an exploration of the area south of Colfax and east of York Street. The walk gathers by Downpours Coffee at the northeast corner of 12th Avenue and Clayton Street. (Clayton is four blocks east of York Street.) This is a free tour. Participants may tip the guide as they wish.

Do certain graves get green before the rest of the lawn in Cheesman Park in the spring. Find out. The walk, featuring Denver’s pioneer graveyard, gathers just to the west of the entrance of the park at Ninth Avenue and Race Street. (Race is three blocks west of York Street). The cost is $20.

Meet by the flagpole in front of Union Station at 17th and Wynkoop streets. This is the return of a classic presenting “The Lowdown on Lo-Do.” It focuses on the underside of 19th-century Denver. Included are tales about tolerated prostitution, illicit casinos, bloody murder, and corrupt cops.. The cost is $20 per person.

Meet at the bust of Cesar Chavez in Chavez Park along the west side of Tennyson Street between 41st and 43rd avenues. The walk focuses on the businesses in the heart of Berkeley. Included will be a visit to the Oriental Theater and to the church where Elvis once sang. This is a free tour. Participants may tip the guide as they wish. 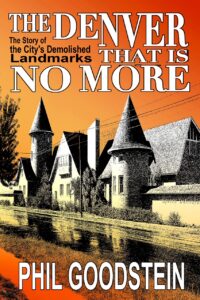 Denver is always changing. This is a key point of a new, extremely well-illustrated history of the city, The Denver That Is No More by the city’s leading critic, Phil Goodstein. The highly entertaining, easy-to-read volume highlights the impressive buildings that were once the city’s point of pride, structures which have given way to the community’s questionable sense of “progress.”

From its beginnings during the Pikes Peak gold rush of 1858–59, Denver has had a split personality. Side-by-side with those who have called it their home, the community has attracted fly-by-night investors who have grabbed what they can from the Mile High City before moving on. In the process, in the hope of short-term profits, Denver has wantonly seen the destruction of distinguished buildings.

The Denver That Is No More takes the reader around the city. It highlights the continual transformation of the central business district. Readers are now on Colfax, learning about how the road was once a fine residential boulevard. Next the action is along South Colorado Boulevard, the place where baby-boomers went to play in the 1960s and 1970s. The book visits the old Elitch’s and enters some of the distinguished, but long-disappeared movie palaces. In the process, the study lives up to its claim that by grasping the Denver that is no more, readers can better understand the contemporary city and help plot its future.

Here are some books Phil recommends for Troubled Times:

It dissects what local schools have been all about. It starts with the city’s first school in 1859, telling about the character of teachers, administrators, and school board members. The study encompasses different schoolhouses, linking them with distinctive neighborhoods. The Denver School Book spells out how the schools have interrelated with the community, and their successes and failures. In passing, it deals with the essential nature of public education and refers to what critics have blasted as “compulsory miseducation.” The extremely well-illustrated Denver School Book is only the beginning of the story. It is the first of a trilogy. The tome ends in 1967, right when DPS was on the verge of school busing upheavals. They will be the subject of volume two, The Denver School Busing Wars. The third part of the study promises to bring the subject into the end of the second decade of the 21st century.

One hundred years ago, Robert Speer triumphantly returned as mayor of Denver.  A prime project was completing the Civic Center.  This was an initiative Speer had launched on first taking office in 1904.  In the middle of the city, he announced, Denver must have a majestic park.  Adjacent to the Capitol, the Civic Center was to be the heart of the Mile High administration and civic life.  He encountered numerous roadblocks in making it a reality.

By the time Speer became mayor, Denver had burgeoned as a metropolis with more than 100,000 residents.  As it had boomed since the Pikes Peak Gold Rush of 1858–59, newly wealthy individuals advertised their affluence by erecting opulent mansions.  Many were in and around what became the Civic Center.

Already in the 1860s, 14th Street had started to emerge as Denver’s address of distinction.  Connecting the future Larimer Square with what became the Civic Center, it was where leading bankers, politicians, and members of high society lived.  The original home of the University of Denver was at 14th and Arapahoe streets while many medical faceless were nearby.  Included was an early home of the University of Colorado School of Medicine at 13th and Welton streets.

The Civic Center proper is in Evans Addition, land pre-empted by Colorado Governor John Evans in 1864 to the south of Colfax Avenue and west of Broadway.  In passing, The Denver Civic Center explains why the diagonal street pattern of downtown ends at Colfax and who the street’s namesake, Schuyler Colfax, was.

Land usages rapidly changed during Denver’s first 50 years.  As Capitol Hill overwhelmed Evans Addition and 14th Street in the early 20th century as the city’s elite neighborhood, the land near the Civic Center was increasingly an industrial and commercial district.  Broadway north of Cherry Creek emerged as the city’s premier site to buy a prestigious new car.  Numerous apartments and residential hotels filled the area.

All the while, the Capitol dominates the hill east of Broadway.  Its construction and the various monuments in and about it, including in the Civic Center proper, are among the themes of the book.  In passing, The Denver Civic Center tells about the tunnel system under the Capitol, complete with the folklore that a couple of floating heads are stashed beneath the seat of the state government.

In the 1970s, the area in and around the Civic Center started emerged as the Golden Triangle.  This increasingly became the popular name for the spread encompassed by West Colfax Avenue, Speer Boulevard, and Broadway.  Besides being the heart of Denver’s cultural district with the Denver Art Museum and the main branch of the Denver Public Library, it came to be the home of elite residential towers.  In passing, the volume notes the Golden Triangle has also been the home of Denver television with the studios of channels 2, 4, 6, 7, 9, and 31 being in and around the section.

The Silver Triangle emerged in the early 1980s as a mirror of the Golden Triangle.  Generally, this is the section bordered by West Colfax Avenue to Speer Boulevard to about Champa Street to 15th Street.  The Denver Civic Center looks at the landmark buildings there, relating how the Colorado Convention Center emerged and contemporary efforts to transform 14th Street into Ambassador Street