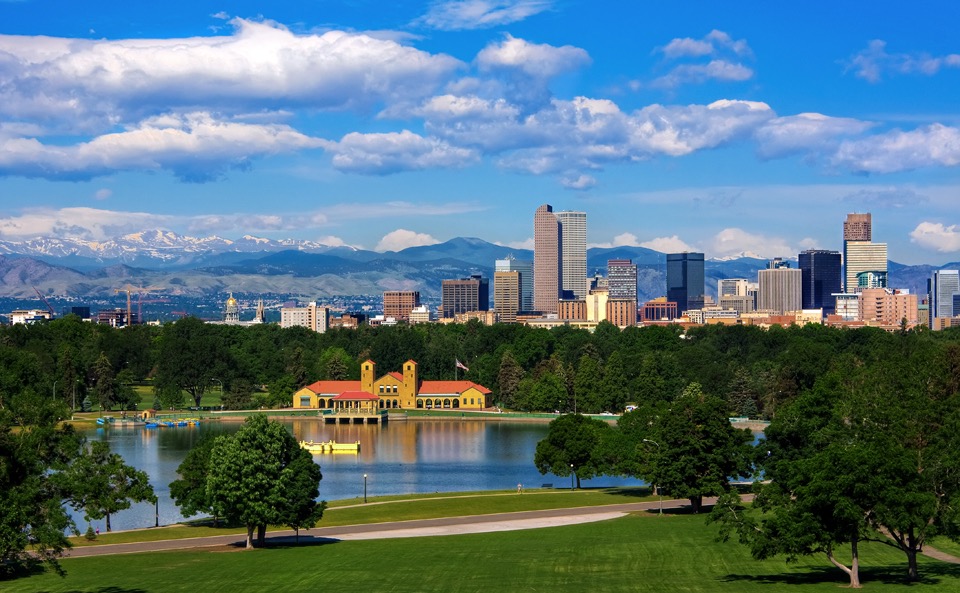 “Queen City of the Plains,” is nestled on the prairie, at the foot of the Rocky Mountains. It is a sophisticated city, with a young, active and well-educated population. Denver attracts those who enjoy living in a large metropolitan area with a mountain playground only minutes away.

Climate
Denver has one of the most attractive climates in the world! The Rocky Mountains immediately to the west of the city protect it from the calamitous storms that plague much of the high plains. Sunshine is the standard! Denver records more hours of sunshine per year than either Miami Beach or San Diego. Low humidity contributes to warm days and cool nights. The average daytime high is sixty-three degrees and the night time low is thirty-seven degrees.

Denver, for years, has been renowned for its “clean mountain air,” attracting many seeking treatment for tuberculosis and asthma. In recent years, the close proximity to the mountains and a growing population, have caused concern with air pollution. During the Winter, air inversions trap cold air along with exhaust vapors and particulates beneath the warmer air flowing down from the mountains. The result is smog! The citizens of Denver, by using highly oxygenated fuels and implementing non-driving and non-wood-burning days, are successfully combating the problem.

Education
Denver has the second highest number of college graduates (after Washington DC) per capita in the United States and the highest educated downtown workforce. Denver has excellent public and private schools. The Auraria Higher Education Center, a unique downtown campus is the largest in the state. The complex combines the University of Colorado at Denver, Metropolitan State College, and the Community College of Denver and offers courses from vocational to doctoral studies. The University of Colorado Health Sciences Center in east Denver offers a full curriculum of medical courses. The University of Denver and Regis College, both private colleges, offer a wide range of under-graduate and graduate studies. This combination of education opportunities brings students from all over the United States and throughout the world.

Culture
Though it is hard to find cowboys or horses on the streets these days, the image of the “Old West” is part of Denver’s heritage. As the city has grown, a wide combination of ethnic cultures have created a community that is both personable and comfortable. Denver takes great pride in its ethnic diversity. In recognition the city holds a number of festivals and events to celebrate the unique heritage that makes up the Denver of today.

In 1988, Denver and the surrounding metropolitan communities passed the metropolitan Cultural District proposal which designates new tax dollars to maintain the existing cultural assets of the community. As a result, cultural opportunities will continue to flourish. Denver is home to the Colorado Ballet, Opera Colorado and a number of national dance troupes. Broadway shows, as well as local theater, provide excellent entertainment. Denver’s Center for the Performing Arts is gaining national and international acclaim for its original productions. The city boasts a number of superb musicians; many Country and Western, Rock and Roll, and Jazz artists began their careers in Denver

Denver offers more than twenty museums and culture centers – the Denver Museum of Natural History and the Denver Art Museum are nationally renowned. International architect, Daniel Liebeskind, has designed the new expansion for the Denver Art Museum. The Lab at Belmar is bringing in an international roster of contemporary artists. The Museum of Contemporary Art and The Mizel Museum are both opening downtown venues in the near future. First Friday gallery walks bring several arts districts alive on a monthly basis. Fine restaurants and hotel accommodations are readily available throughout the city.

There is no place more suited to the avid sports enthusiast than Denver. For the fans there are the Denver Broncos, the Nuggets, the Rockies, the Avalanche and the Rapids. For the more active, there is world class skiing and mountain sports within a two-hour drive. Golf courses can be found in abundance throughout the metropolitan area; and walking, running and bicycling are year-round favorites with health-conscious Denverites.

Future
Denver is constantly planning for future growth and prosperity. Its renovation of the downtown and other areas has cleared the way for new commercial growth while maintaining much of the historic charm. Its central location between the Pacific Rim and Europe offers great advantage for world communications and air travel. Denver International Airport, the new convention center, sophisticated shopping, and availability of affordable residential and commercial real estate make it a city eagerly meeting the Twenty-first Century.

Denver is a city of…