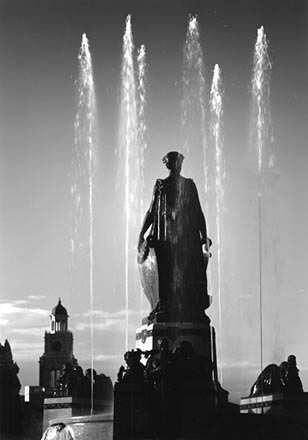 Modeled after New York’s Central Park, Denver’s City Park was already in the works by the 1870’s. Initially intended to be two open spaces—the current site connected by 17th Avenue to an area surrounding Sloan’s Lake—City Park was created on 320 acres in 1880 and spanned from 17th to 23rd, York to Colorado Boulevard. With the 1913 addition of the golf course, the park’s acreage expanded to 480 acres.Creating the centerpiece of Denver’s park system was not easy. Squatters on the open prairie land had to be evicted and water was needed. City Ditch provided the water to supply the tree plantings and in 1896 the City Park Lake was created to drain the surrounding land. To promote the idea that this open space was unique, four ornate gateways were created near park entrances and streetcar stops. In addition, in 1907, work began on an esplanade to connect the park with Colfax Avenue.

Very family-oriented, the mood in the park was quite conservative. No dogs were allowed and a cell was built below the park pavilion to handle drunks and other rowdy individuals! City Park became an important part of the Denver social scene during the turn of the century drawing crowds of up to 10,000 for some events. The Denver Municipal Band played nightly in the summers and the installation of the electric fountain in the middle of the lake further enhanced the park’s appeal. Paddleboats and canoes could be rented for use on the lake that was utilized for ice-skating in the winter as well.

Sculpture was an important part of the City Beautiful movement. City Park contains some of the finest statues in the city including the frontier women and miners perched above the Sullivan Gateway and the “Grizzly’s Last Stand” on the west side of the Natural History museum in City Park.

Allen M. Ghost led the residential development of the West City Park neighborhood with his early purchase and planning of the Parkside Addition (18th to 21st, Gaylord and York Streets). Here, mansions that remain today began springing up in the late 1890’s and early 1900’s—one of the most striking at 18th and York, the Frank Smith mansion.

After struggling with a period of decline, the result of increased traffic and crime in neighboring Capitol Hill, City Park has been revitalized in recent decades. As during the early 1900’s, the park continues to draw crowds for summer concerts and festivals and remains a haven of open space for Denver residents to enjoy year round.