Curtis to California, 24th to 33rd

Our Vision
To create a heritage center where African American history is celebrated 365 days of the year.

Our Goal
To help all people become aware of the significant contributions African Americans have made toward the development and progress of America.

In 2005, we were named The Best of Denver by Westword
Magazine for our rich cultural teachings and diverse educational environment.
The Women’s Bean Project
The Women’s Bean Project is an entrepreneurial business and job skills program for low-income women and is housed in a renovated firehouse. For more than 16 years, they have helped women break the cycle of poverty and unemployment by teaching workplace competencies for entry-level jobs and by teaching job readiness skills in their gourmet food production business.Sacred Heart
The oldest functioning church in the city, this place of worship was established in 1879 for Italian and Irish immigrants. Run by the Jesuits, this church is in the traditional cruciform shape. The present wooden steeple was replaced after the original belfry threatened to crash through the roof. Back in 1912, two priests in residence restored the scaffolding and repainted the whole church. The interior has a Gothic feel with ornate windows of stained glass. In addition, there is a beautiful mural of the death and resurrection of Jesus.

Mestizo-Curtis Park
This is the neighborhood\’s namesake open space. It lies in the center of the neighborhood, and was created in 1868 as Denver\’s first public park. Originally named after postmaster Samuel S. Curtis, the name was recently amended to Mestizo-Curtis Park to celebrate the cultural diversity of the community. The park offers an outdoor pool, tennis and basketball courts, horseshoe pits, soccer field, and a new playground. 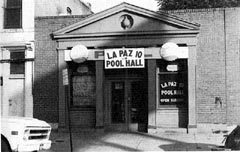 Built in 1891, this cottage was remodeled in 1916 with a Neoclassical façade designed by Merril and Burnham Hoyt. Housed the undertaking business owned and operated by the son of abolitionist Frederick Douglass until 1957, when it became a billiard hall.

Read about the history of Curtis Park